Peru: Hiking in the Colca Canyon 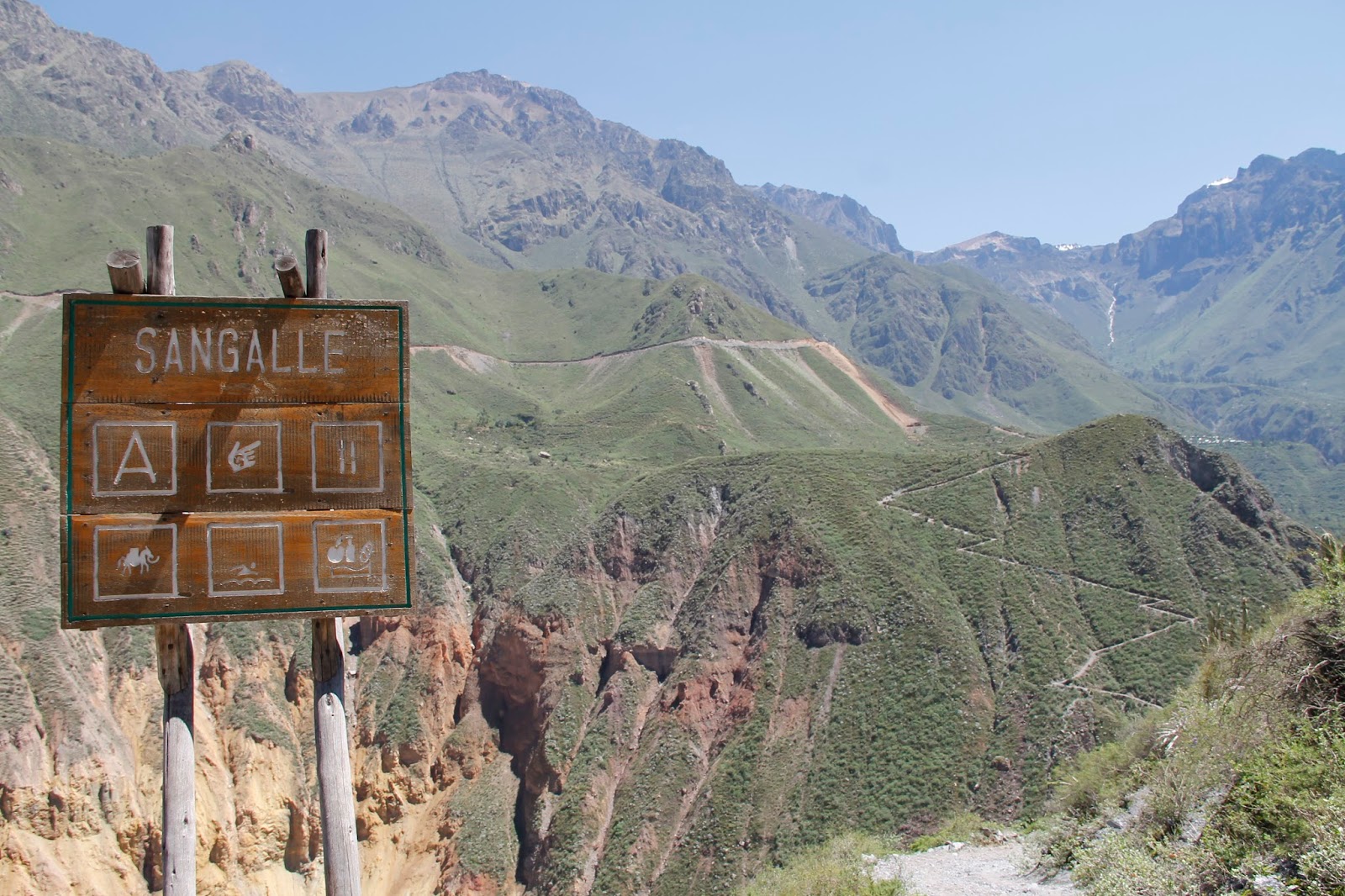 Hiking in the Colca Canyon

Hiking in the Colca Canyon was one of my favourite part of the trip. It was challenging both physically and mentally, and maybe humbling, although if you were to ask me directly, I'll blame the high altitude and heat and deny any lack of fitness. We decided to hike on our own instead of going with a tour company, and were quite pleased with our decision. From Puno we took a bus to Chivay, and from there a cab to Cabanaconde, where the trail begins. Finding our way in the canyon was pretty easy. People are generally happy to give directions, and there aren't just that many trails to get confused by. 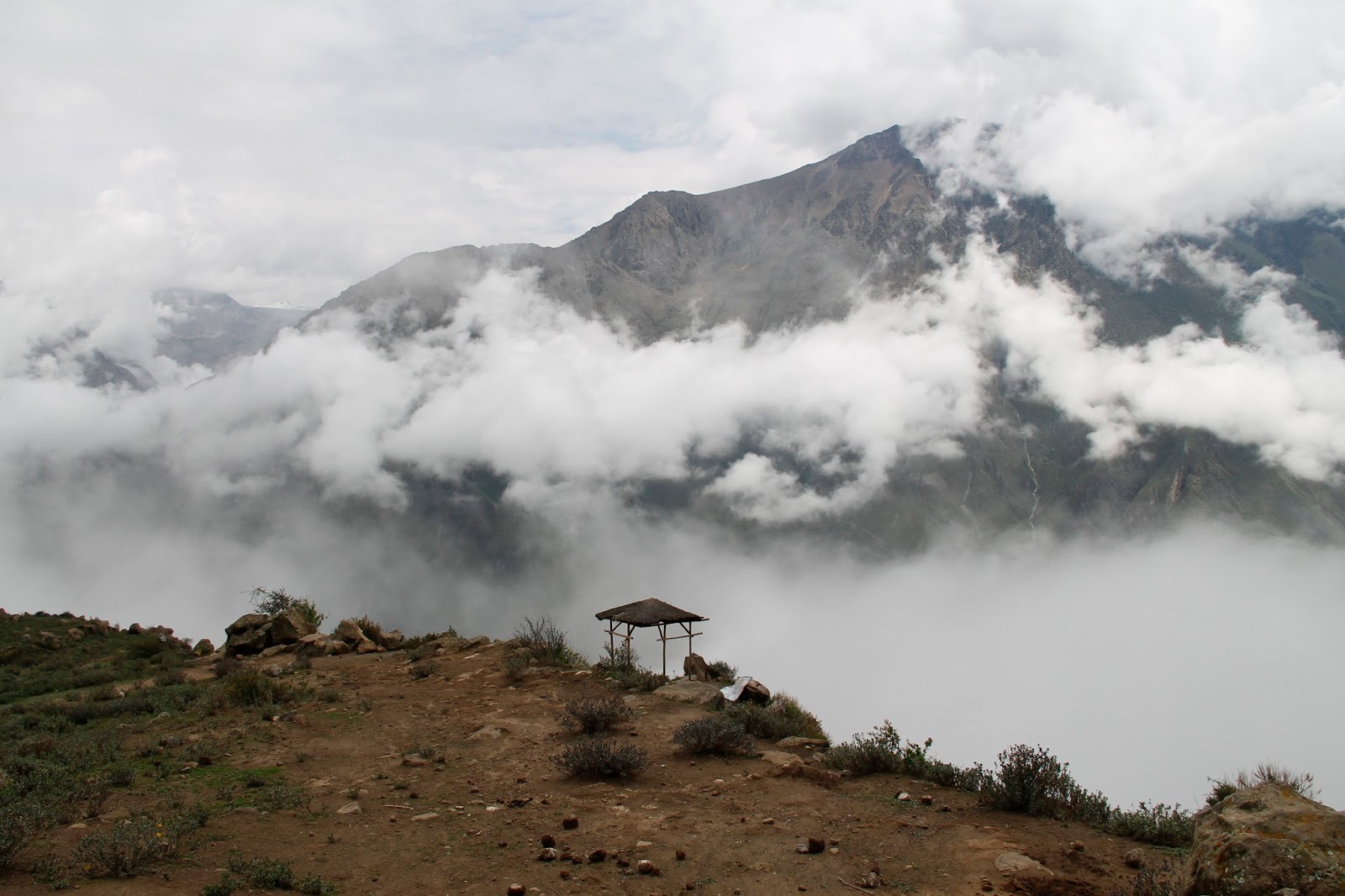 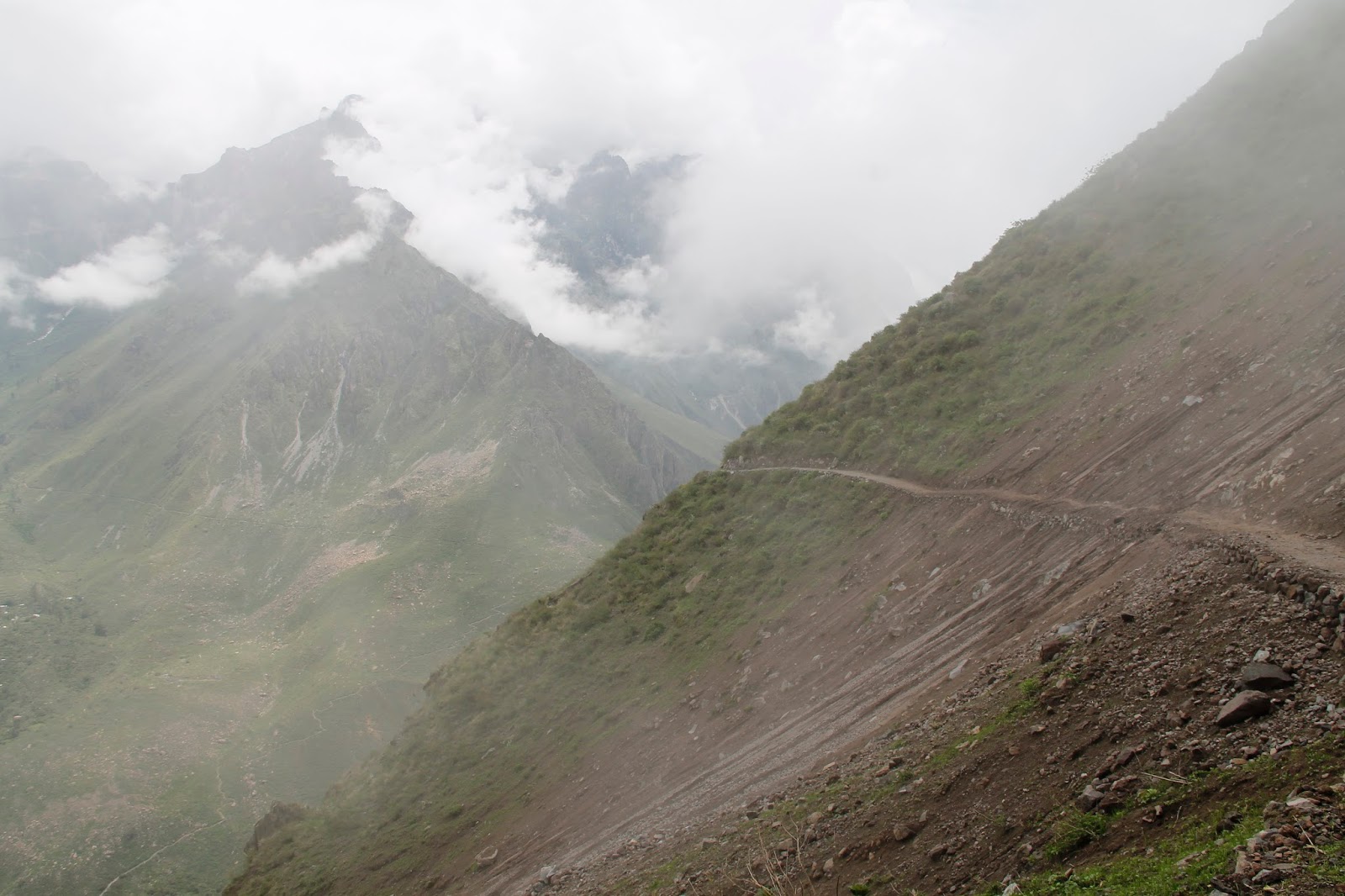 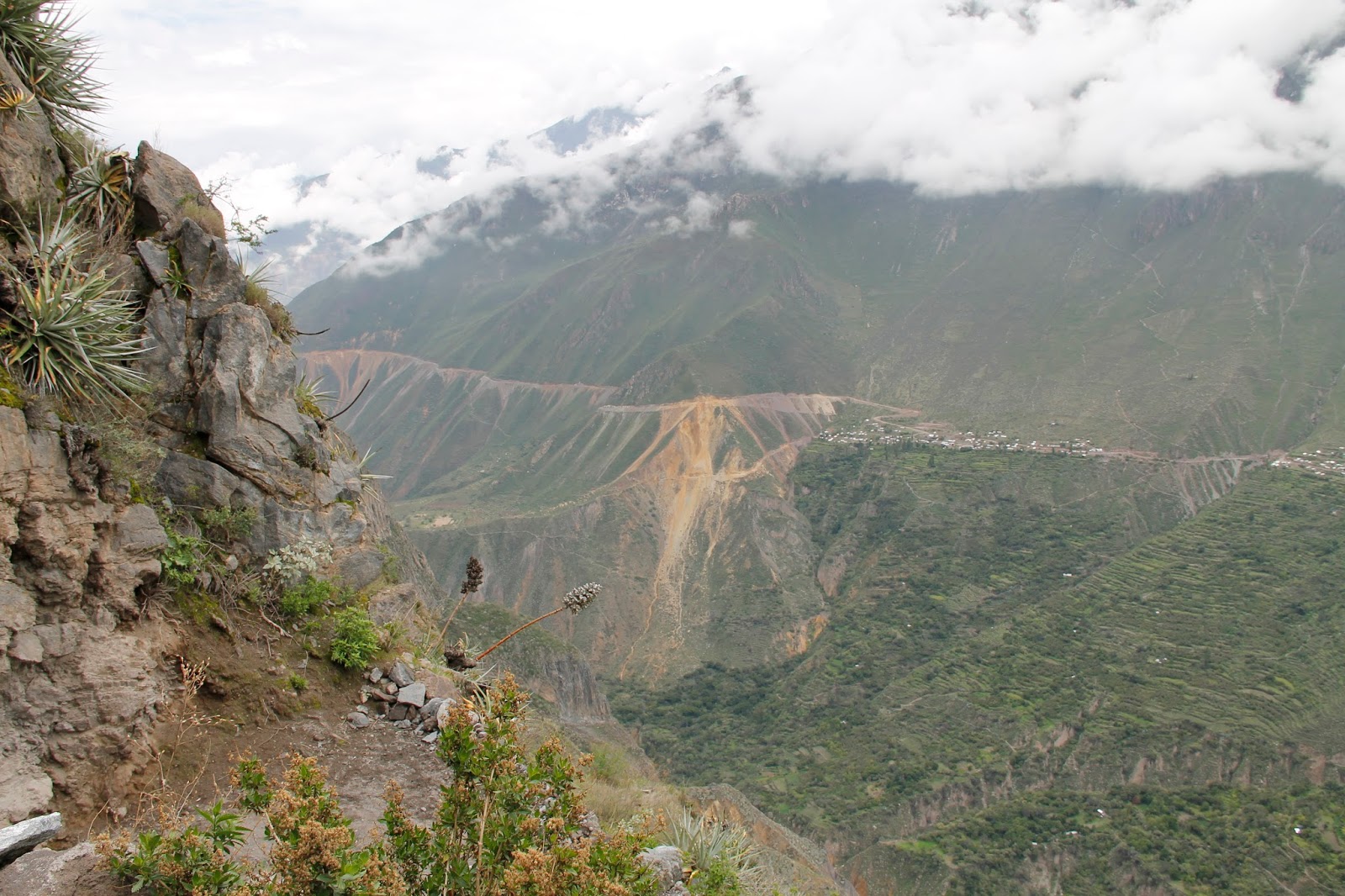 We set off late the first morning, despite warnings that during the rainy season, the rain starts every day around 1pm. It was another overcast day, with parts of the canyon slowly revealing themselves as the clouds moved. We hiked down into the canyon for about 3hrs, reaching the bottom before going up on the other side to San Juan de Chuccho. It was a bit terrifying, with the trail at times extremely narrow along the steep cliff. My toes were sore and I was starving by the time we got to the bottom of the canyon, ready to stop for a snack. We crossed the bridge and went up for a little bit, as the rain started pounding, on time as predicted, until we found Hostal Gloria, and stopped for a lovely meal. Their rooms looked really nice, as far a minimal-electricity-down-a-canyon-accomodations go, but we wanted to get a bit futher that day, having planned to make it to Cosñirhua. So up we went, as the rain thankfully stopped, with recommendation from the owner at Gloria's to go check out his friend's place. Unfortunately, the friend's place did not compare to his. They were second story tiny dirty rooms with large cracks on the floor, the whole thing built on sketchy pillars. I imagined the building collapsing in the middle of the night, and we left. The second place we checked out wasn't much better. There was one nicer room and an awful one, with giant spiders hiding in the bed, and no place to sit/eat/drink. It was 4pm, and we still had about 2 1/2hrs before sunset, so we decided to keep going to Sangalle, or the Oasis. 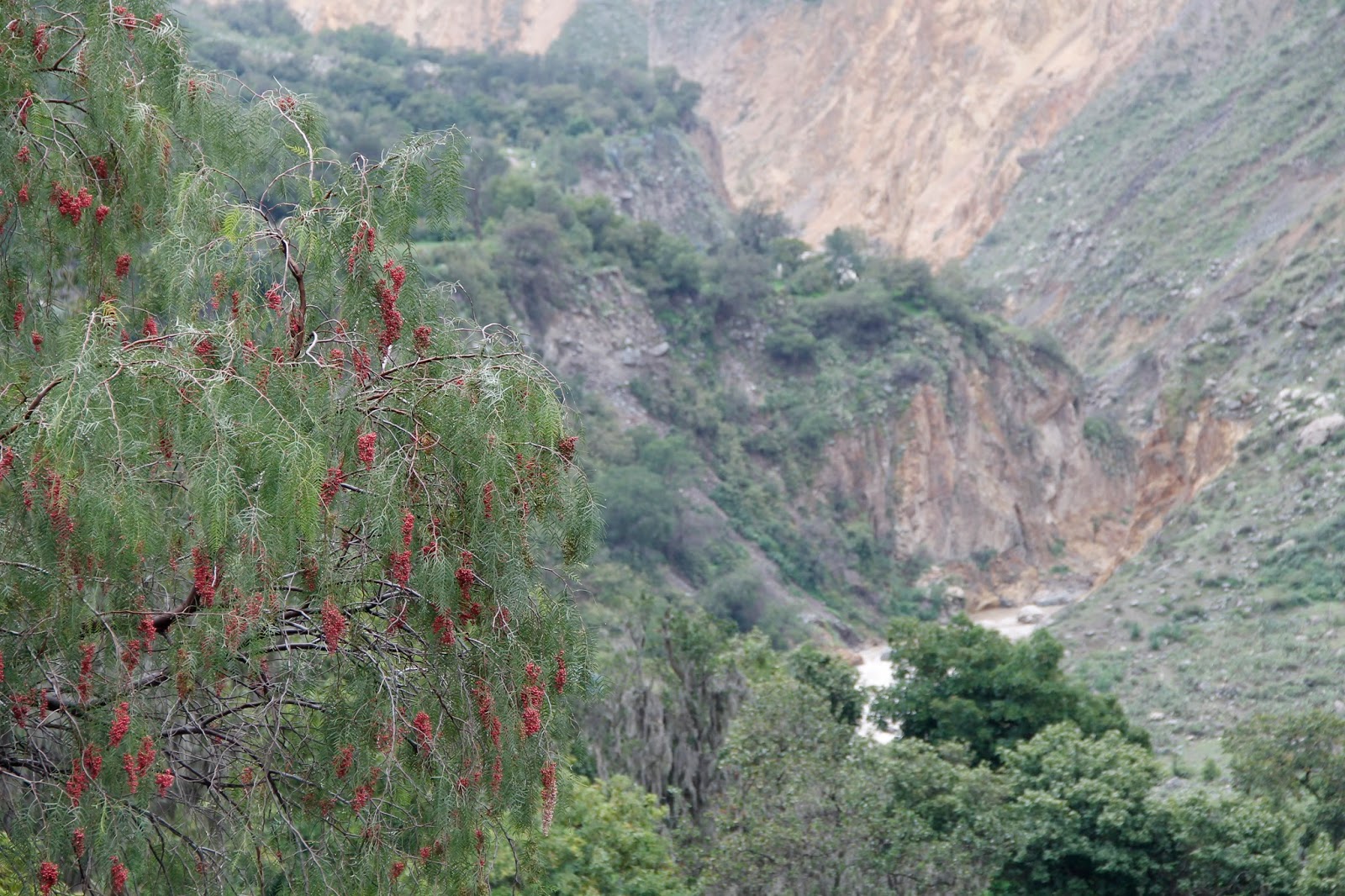 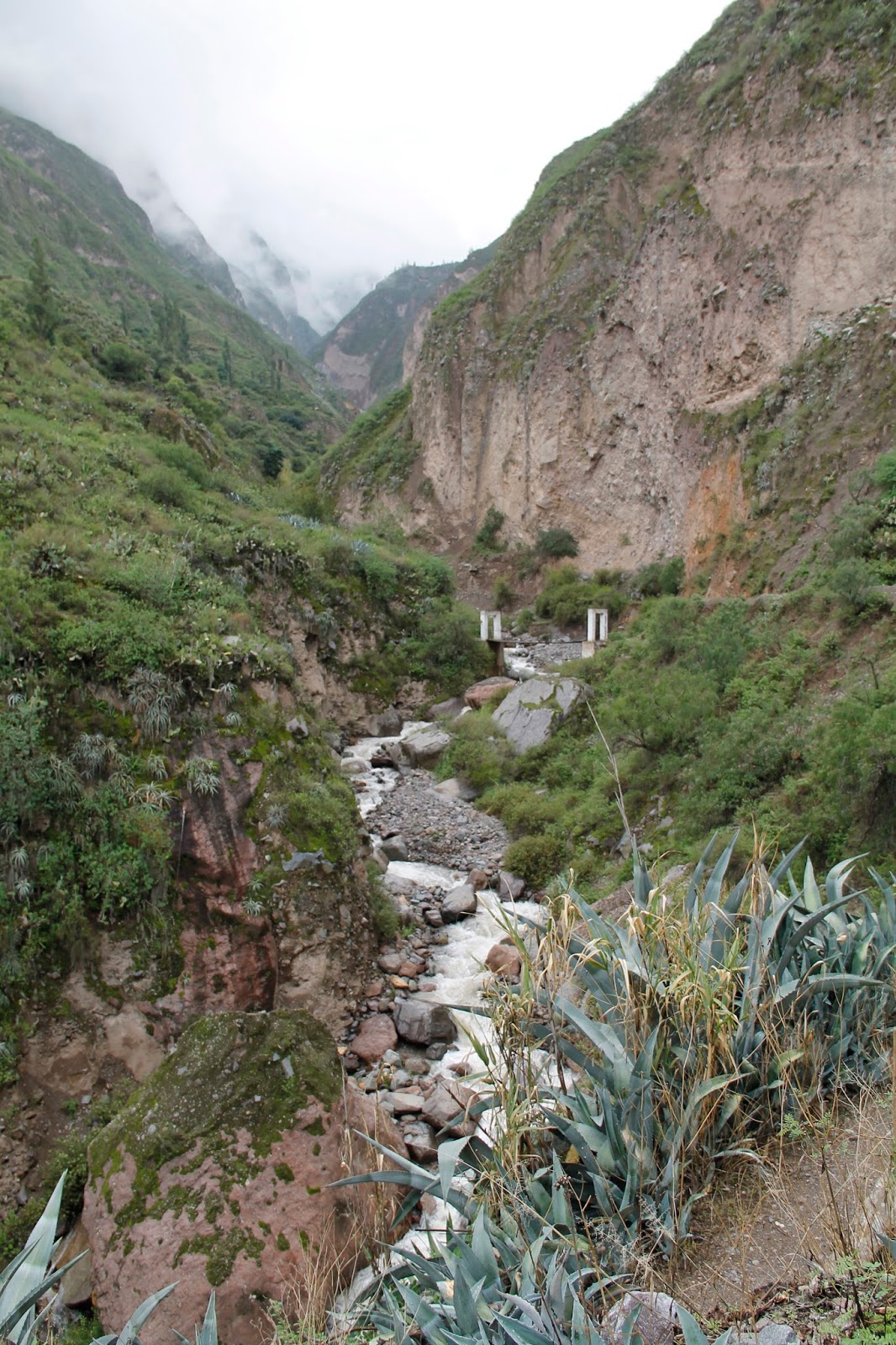 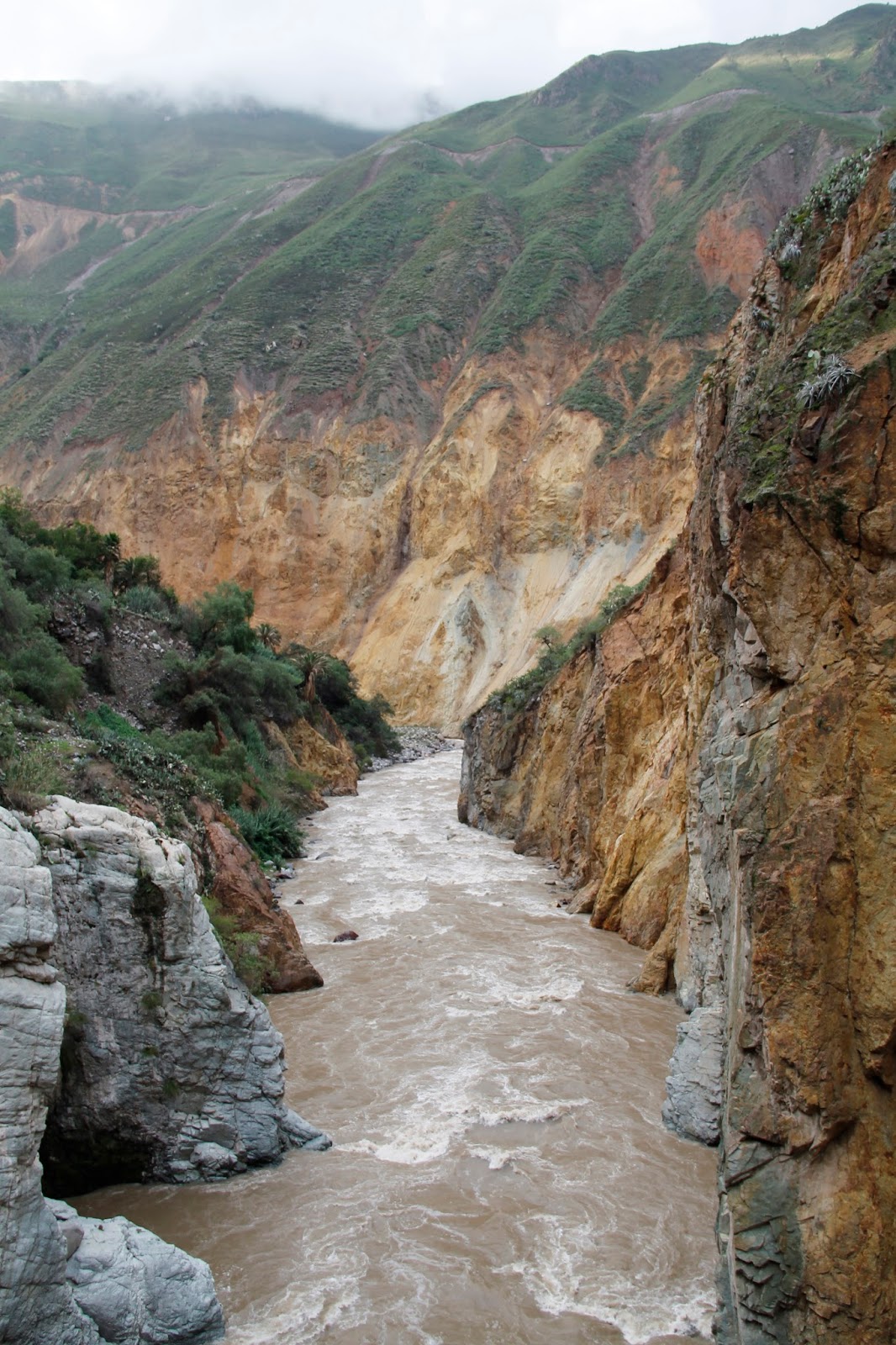 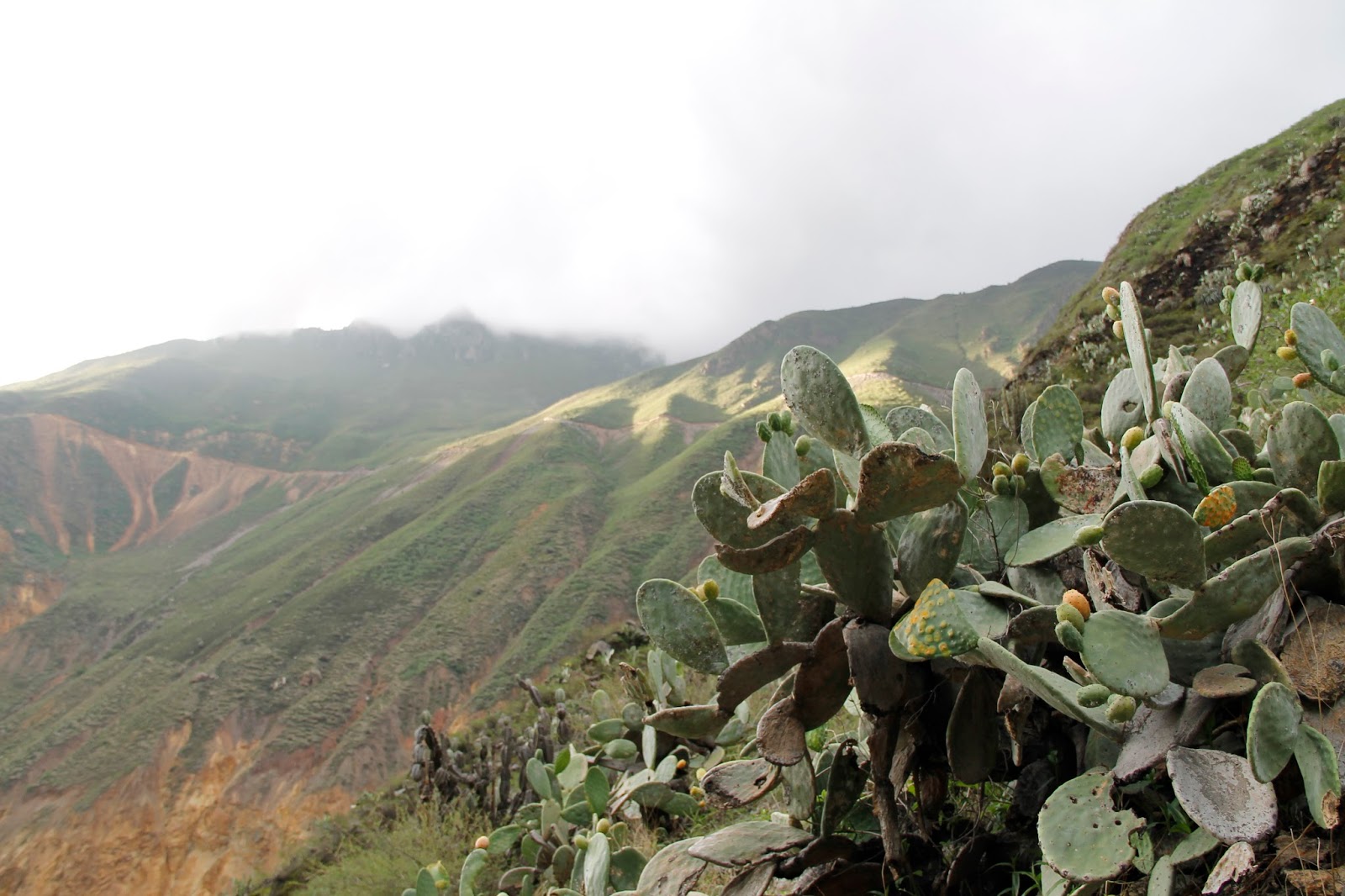 We passed cows, horses, and donkeys, some less pleased than others to share the path with us, and kept hiking up, down, up, down. We finally saw a sign for "Oasis" and each took turns singing lyrics that took a whole new meaning: "by now you should have somehow realized what you gotta do". We crossed landslides, from both rocks and dirt. My toes were hurting, my legs were tired, and I was scared of falling. Just as the sun was getting lower in the sky, we started seeing more cacti, some waterfalls, and soon the bright blue pools in the oasis. After about 7hrs of hiking, we had arrived. The rooms weren't much better, but there were flowers and palm trees everywhere, tables to hang out, beer for sale, and a restaurant. It felt kind of amazing and magical. We drank, played some games, and went to bed with bellies full of pasta. 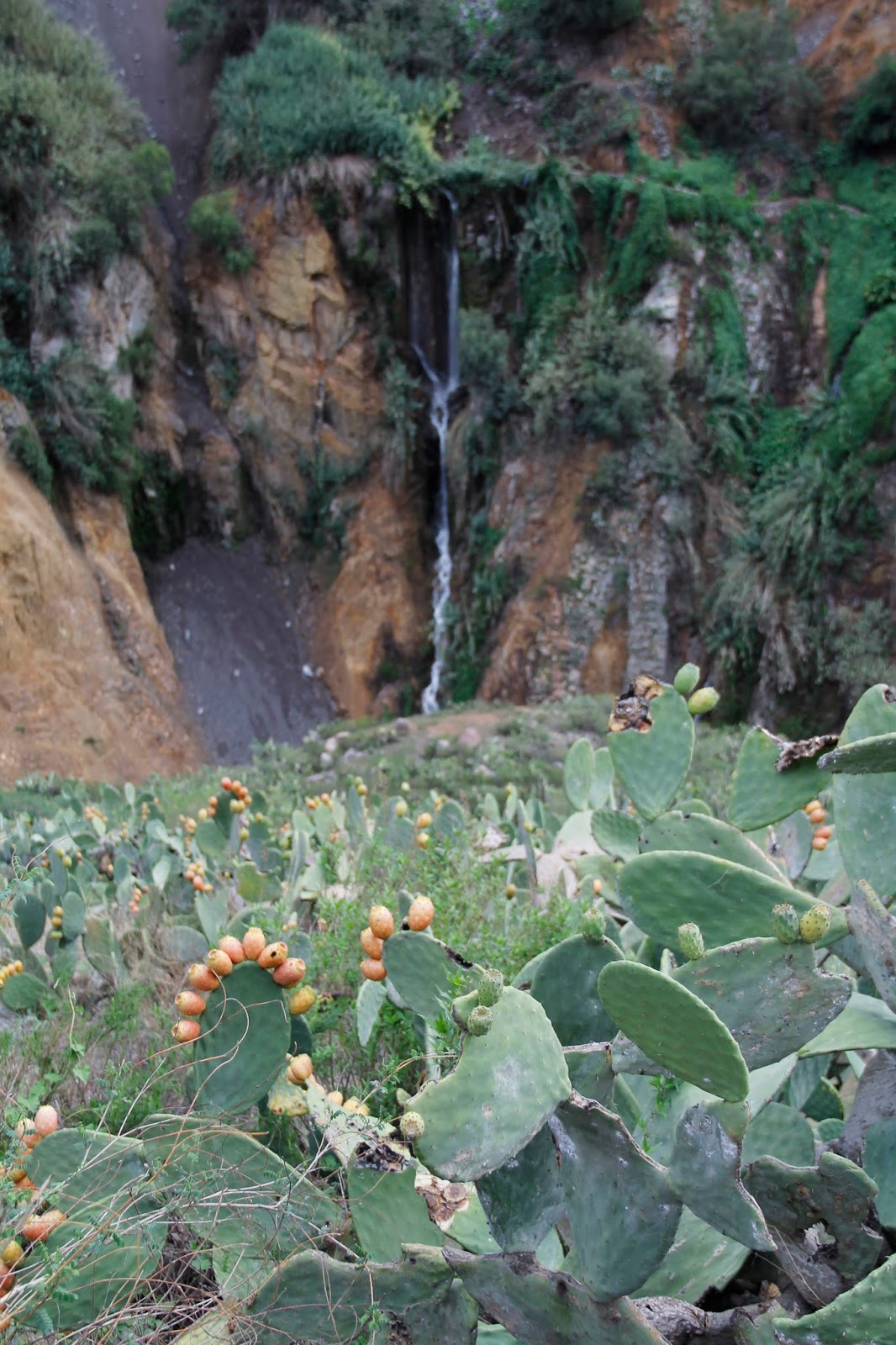 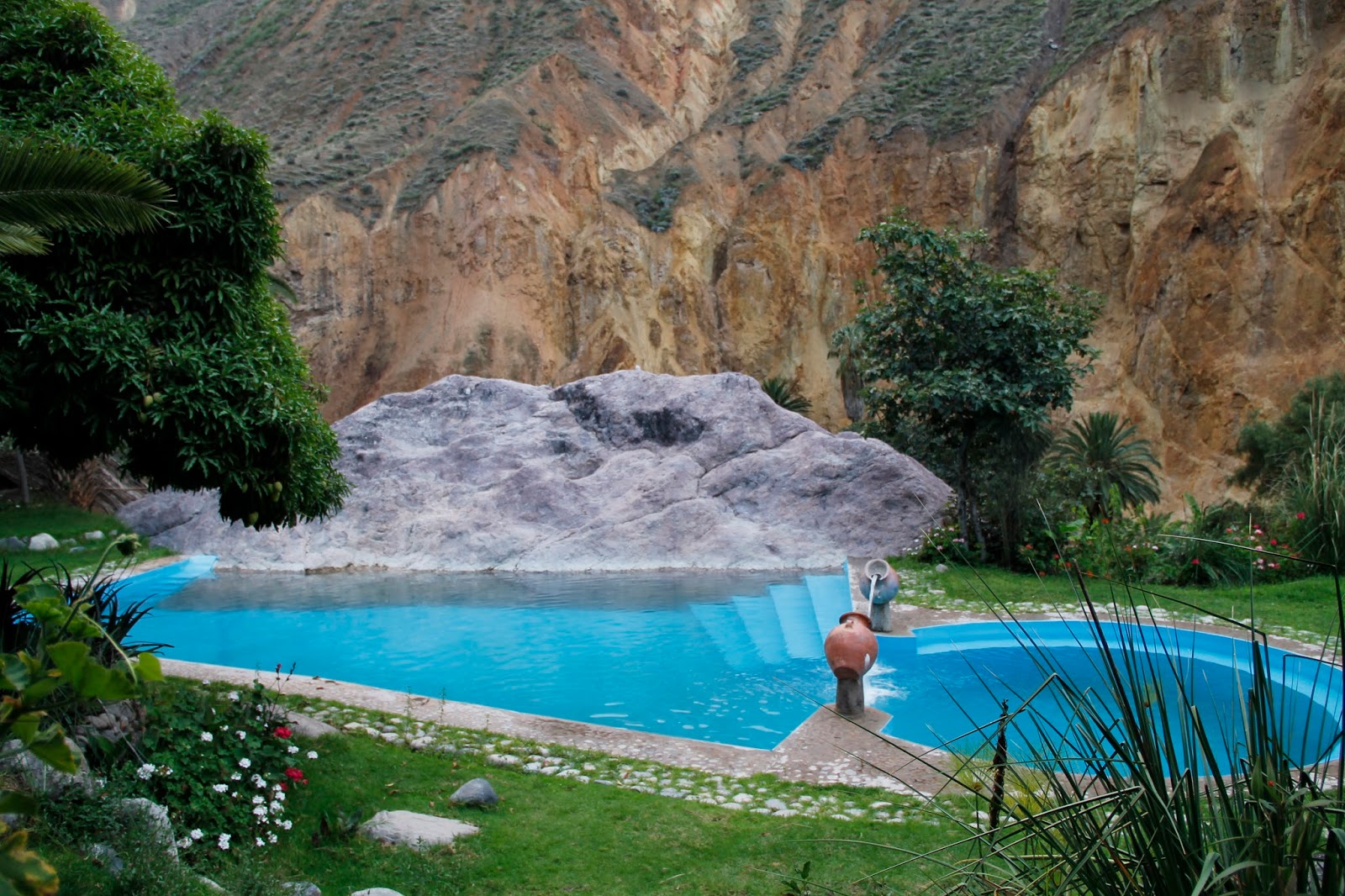 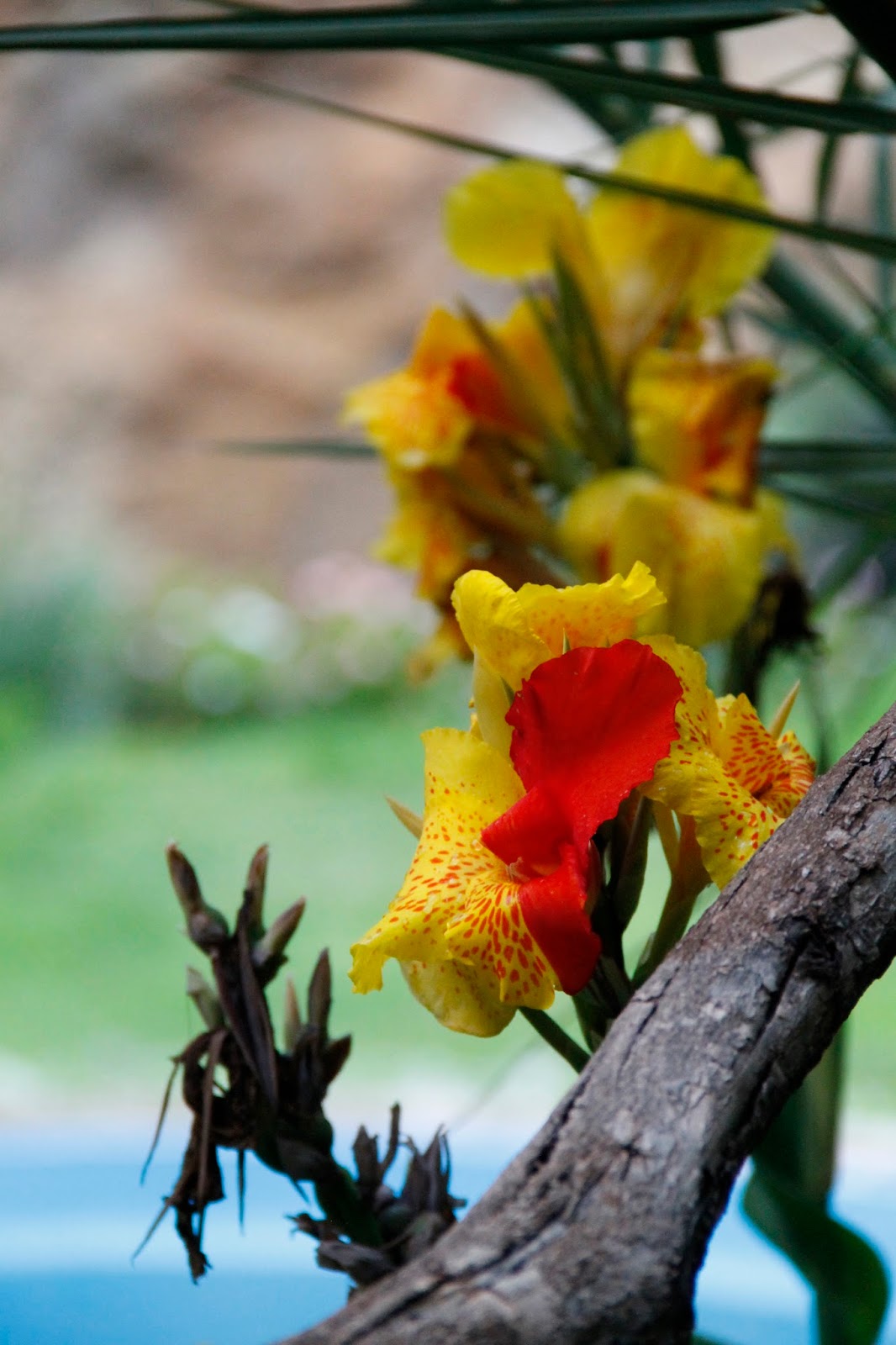 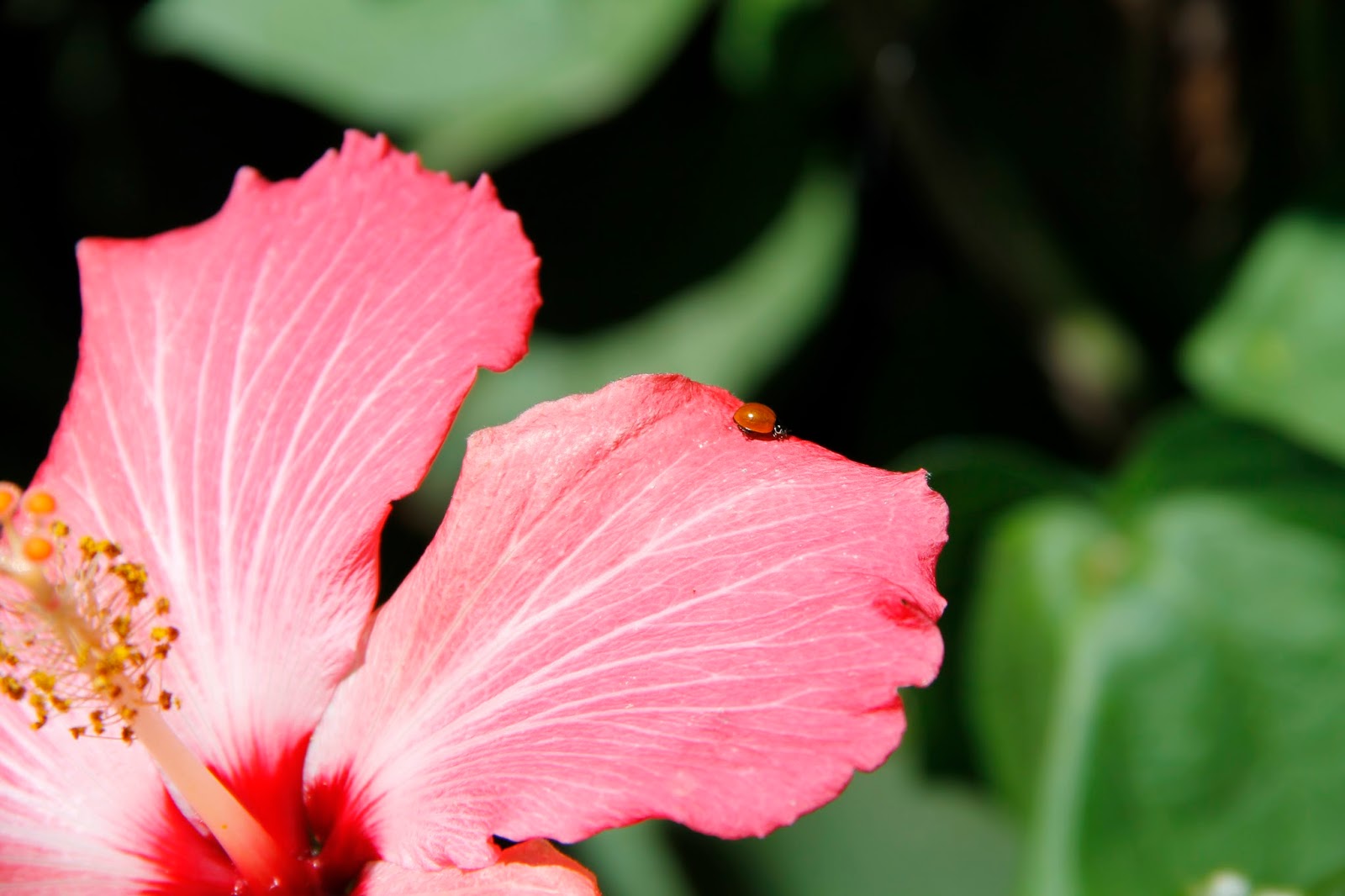 The following morning, we took our time getting up and eating breakfast, as most people hurried to leave by 5am in order to hike back up and catch a bus to Arequipa. Running up a canyon to catch a bus sounded like somewhat of a stressful morning, and so we chose to hike without feeling rushed, and have time to enjoy the satisfaction of reaching the summit. We leisurely had coffee and pancakes, and slowly got ready, as the sun was by this time already blazing hot. We went up countless switch backs for the next 3hrs, going up just over 1,100 meters of elevation, passing humming birds, frogs and snakes. The previous day was more mentally challenging, even though I'm not usually afraid of heights, but this one was definitely more physically demanding. Reaching the top was extremely satisfying, and so was the wood-oven pizza later that day. 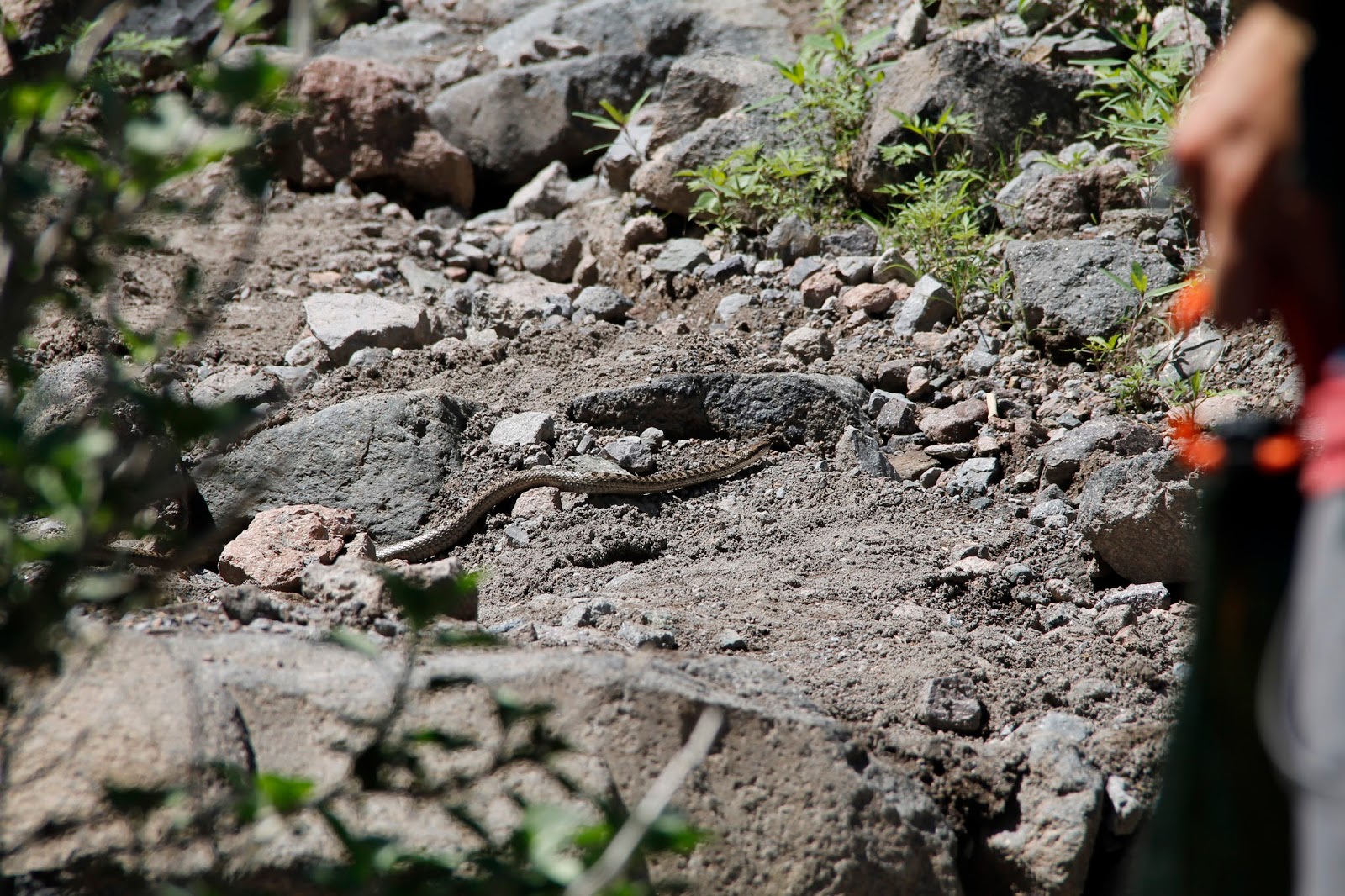 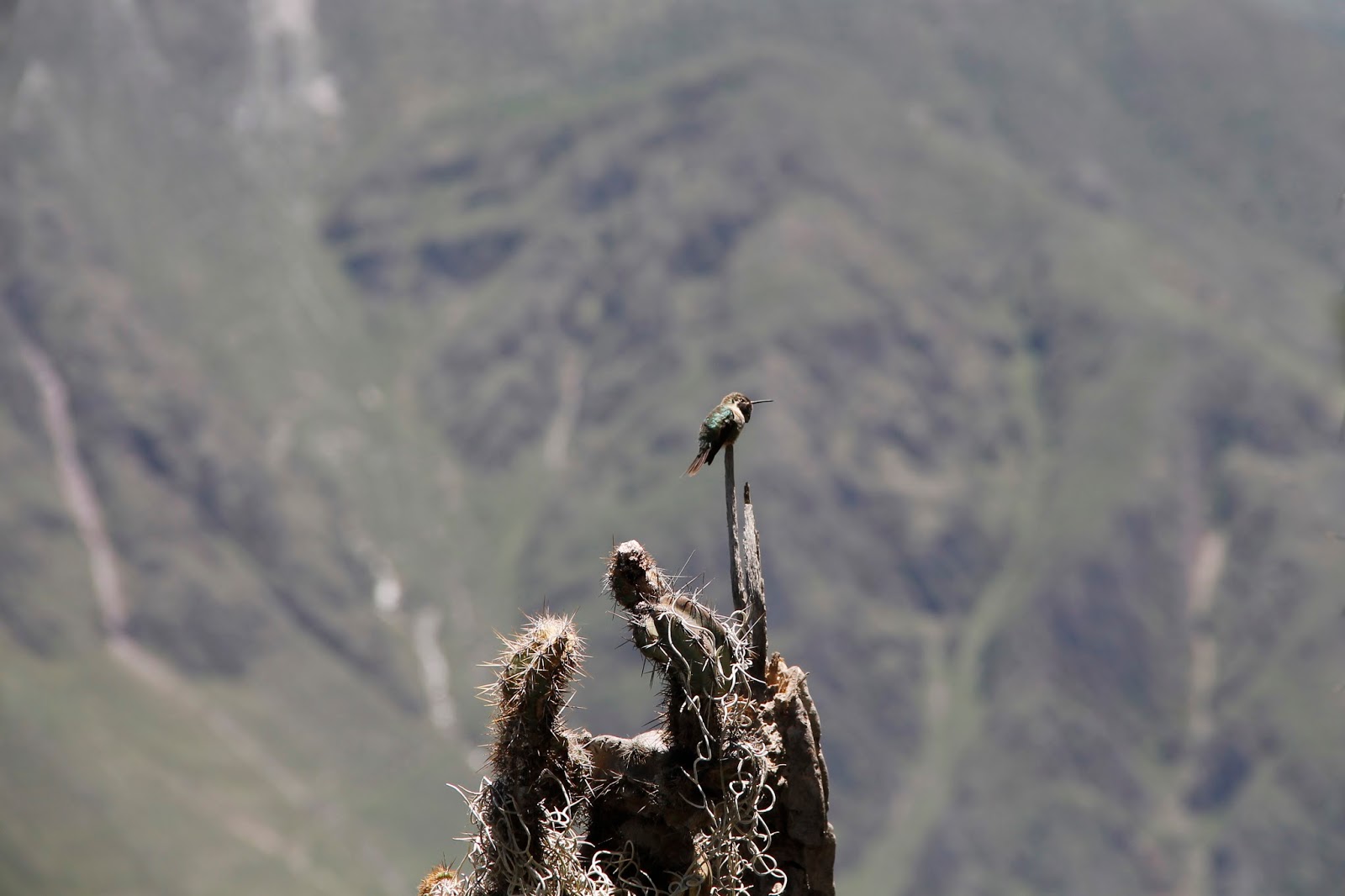 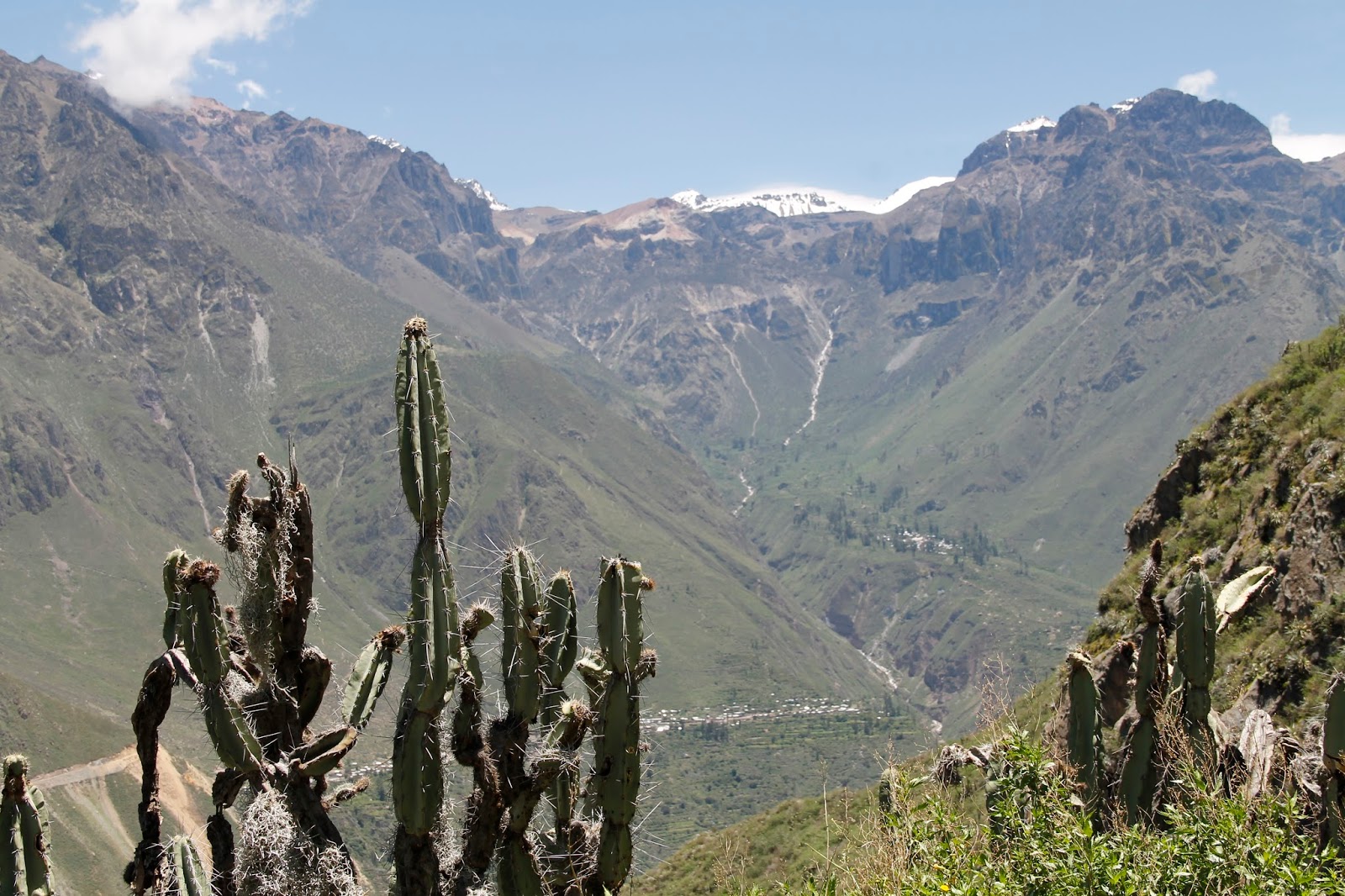 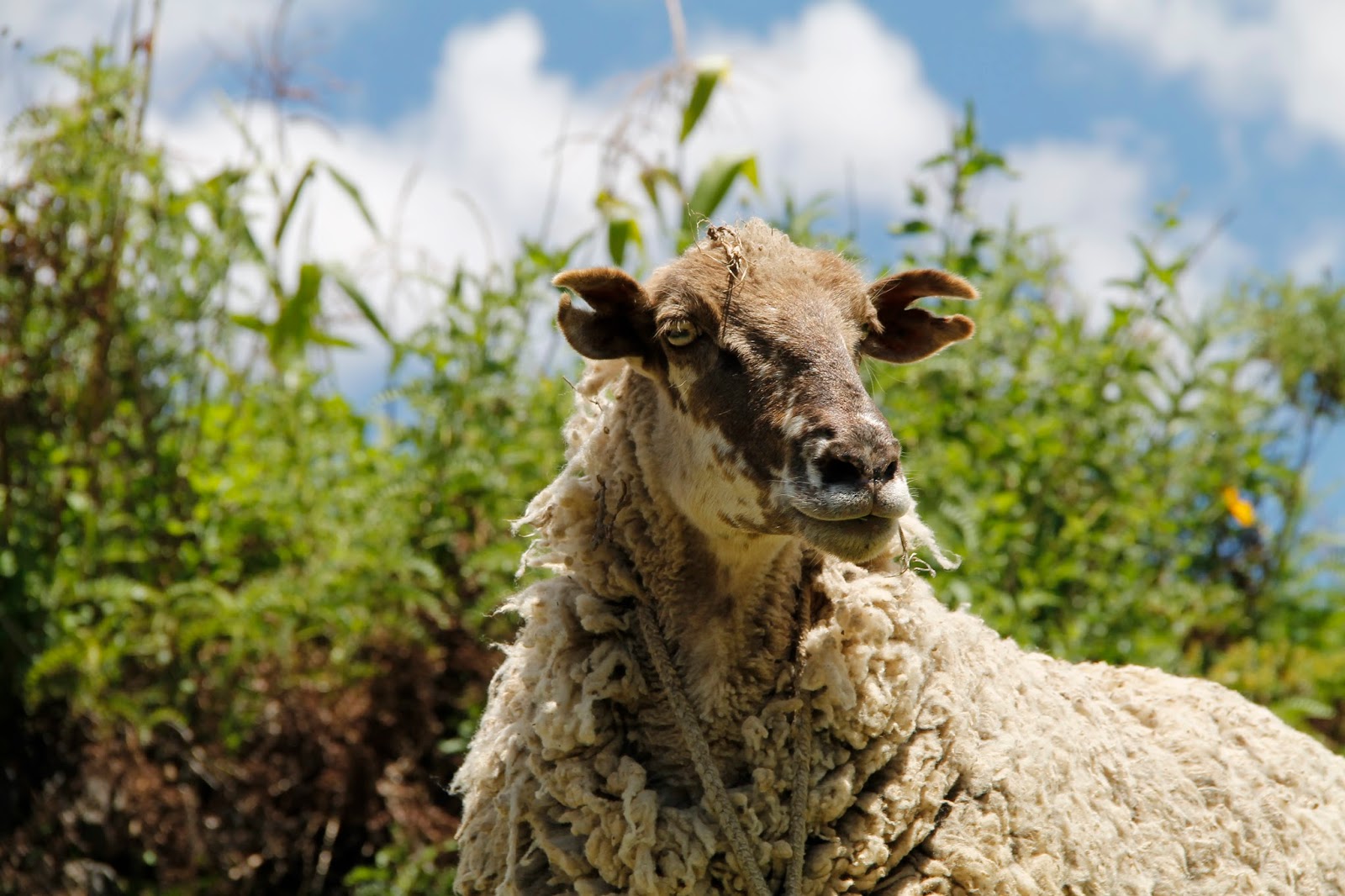 We left for Arequipa the next day, after a rough night which led me to take Cipro, Dramamine and Imodium. I was quite nervous for the drive back to Chivay, as I was trying to keep down my first few sips of Powerade, holding on to a plastic bag. Turns out, I feared so much for my life during that drive, that it took precedent over how terrible I was feeling. The road is tortuous, full of blind corners, and the driver preferred to drive on the incoming traffic side, presumably to avoid landslides, which meant that we were speeding around blind corners, on the cliff side, on the wrong side of the road. To make this better, he was answering his cellphone/making calls most of the way, and kept looking back or into the canyon, presumably to spot condors for us. He did find one, which was far away and for which at that point, I couldn't care less. We stopped at the hot springs which everyone else enjoyed, and were strongly encouraged to buy lunch at an expensive buffet, where I sampled various white foods, as I thought, rightfully so, that they would be bland. We made it safe and sound to Arequipa a few hours later, as I started to feel better, ready for our next adventures.

A the last minute, on a spur of the moment decision at REI, I picked up this 4L waterproof sack, and it has been a life saver. I have a few that I use to pack my clothes in, keeping my backpack, which on longer trips feels like a little house on my back, organized. This one I picked up somewhat hesitantly, not sure how useful it would be, planning to keep my camera in it, inside my purse. I'm pretty sure that I would have irreversibly damaged my camera without it. It protected it from rain and sand, and worked perfectly, even when I added my passport, bus tickets and wallet. The second one is this half Buff, that I planned to use on sunny days to avoid getting sunburned on top of my head, where the hair separates. It kind of became a daily thing. Worked for sun, laziness, and for those hard cold mornings, when the shower refused to spit out even a drop of warm water, when I gave up on the idea of shampooing my hair.